We are now 2 weeks into the remodel of our first floor and daily changes begin to happen.  We spoke to the contractor, and things will take a bit of a slow down soon as we wait for the next steps to be able to happen.  So far our house has been an active construction zone from 7am-4pm each day, but we don't mind.  We love going into the first floor area after the contractors leave for the day and discovering what has changed.  We have been photo journaling the changes so that we can always remember the process.

First - for dust and Covid protocol - the contactors have walled themselves in. We are able to go up and down to our second floor completely separated by the workers, which has been excellent. 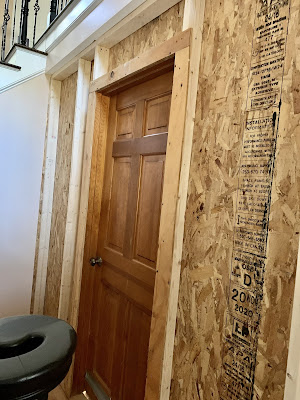 They have now taken down more walls and supports from where the old kitchen was and where the new one will be.  Only this small area remains to be moved by the plumber 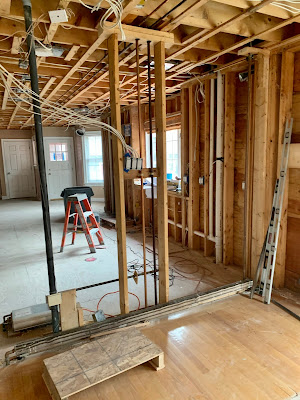 They took down the last of the walls in the upcoming mudroom early in the week.  Those three doors in a row look weird in this view, but soon this space will be broken up by new walls 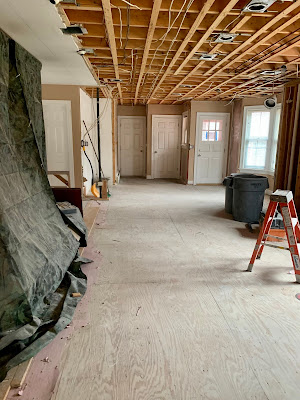 Look at that now - no more wall.  The middle door there is to Mat's office.  The door on the left is to the garage, and the door out of the picture on the right is to our backyard. 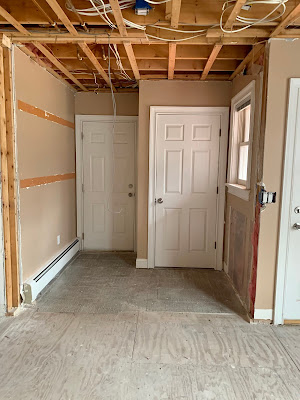 The walls and doors that were to the small pantry we had are gone!  This area will become built ins (eventually) in the mudroom. 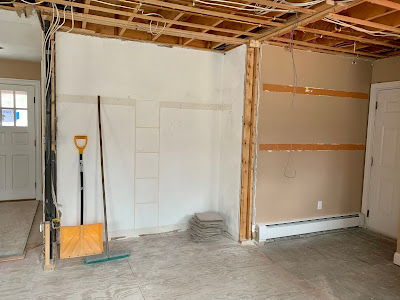 They have closed off the windows and framed them for the new windows that will be installed.  This area had to be raised since it is where the dishwasher, cabinets, and sink are going.  Before it was just a bay window.  The floor also had to be raised to support all that weight. 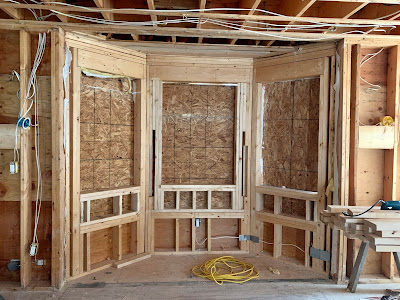 By mid week the pantry was framed!  This was so exciting.  We are putting in an 11 foot pantry with cabinets and shelving - my dream!  It is going to be amazing.  It is right in front of the fire place 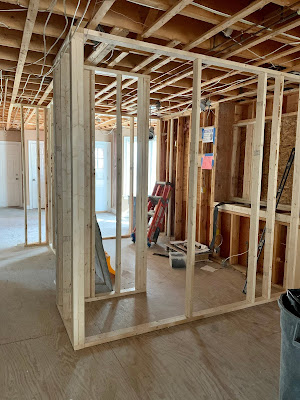 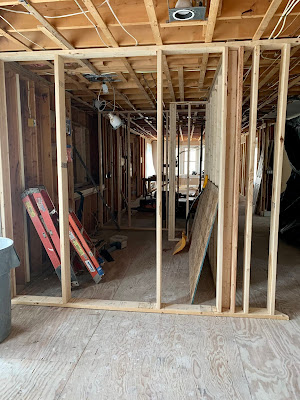 Me in the pantry! 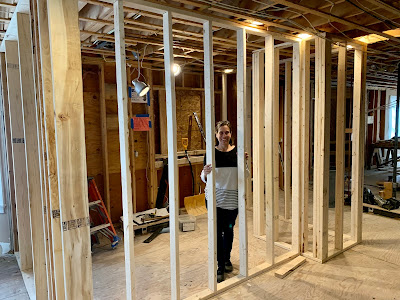 There will be a small window in the pantry.  We had a large three framed window that was here, and we really didn't want to change the layout of the outside of the house by closing it off.  Too costly.  So we are keeping part of the window and the contractors will box it in and build a nice shelf from the window to the counter. 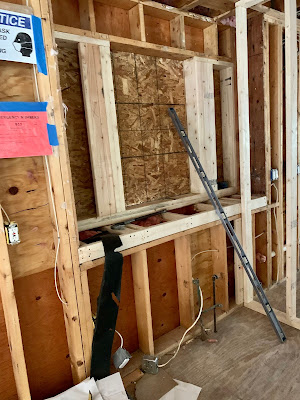 How our windows look from the outside.  They will both shrink significantly 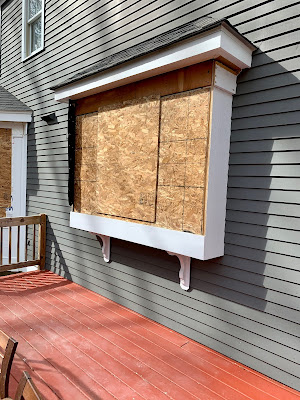 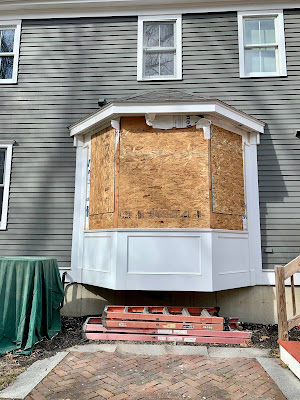 We had a leak that was occuring a few weeks before the remodel started (thankfully before and now after it was complete is how I look at it) from a pipe in the upstairs kid's bathroom.  The plumbers have discovered where it was and had to make two holes in the kid's bathroom walls to fix it.  The part has been ordered, and we are grateful that it will be resolved quickly. 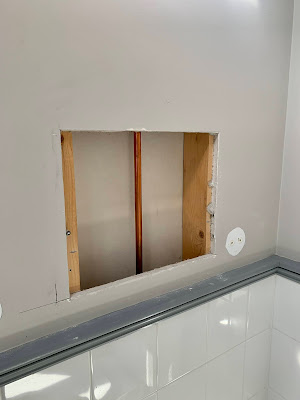 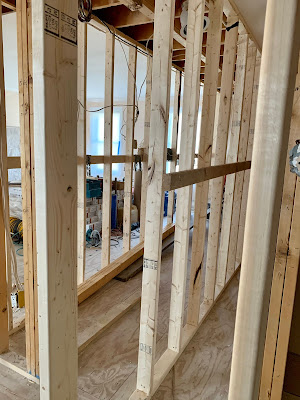 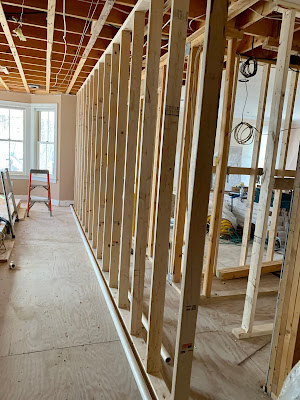 The doorway into the mudroom got framed.  We are starting to see that space come alive 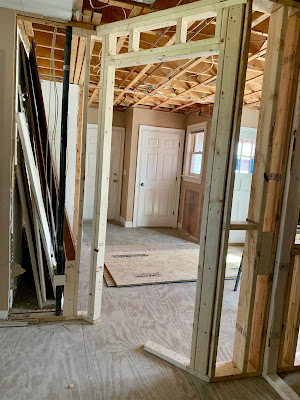 Midweek they also finished framing the doorway into the pantry from the mudroom.  The two small framed areas on either side are going to be recessed for storage/knicknacks.  That was Mat's idea. 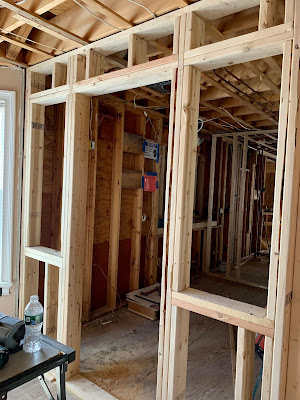 Looking into the mudroom from the pantry 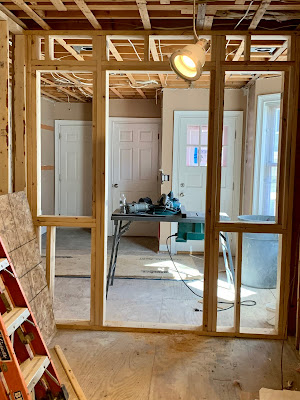 Beam one goes in. It is HUGE.  It is spaning the entire length of our living room and it has been facinating to watch how it all works. 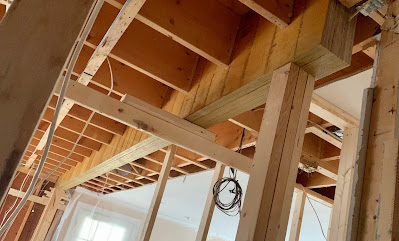 Near the end of the week the last of the plumbing was removed from the area that used to be the backwall of the old kitchen.  We are SO CLOSE to having the last of the walls down. 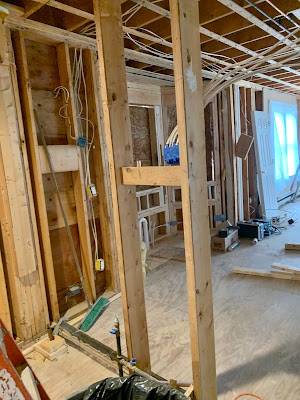 They finished framing the doorway from the kitchen into the pantry.  We decided to make the doors into and out of the pantry taller than the average door since they will be mostly openings.  Wanted the space to look as big as possible. 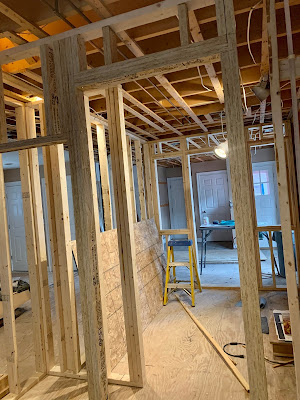 Most of the plumbing has been rerouted.  We only had to be one day without water - and only for a few hours.  They did a great job of not inconveniencing us.  With the kids at school we hardly noticed.  The new plumbing is all Pex - bendable and plastic - it is wild.

At the end of the week beam one has been secured and the temporary walls come down.  I cannot tell you how amazing it is to see that space.  It is HUGE. 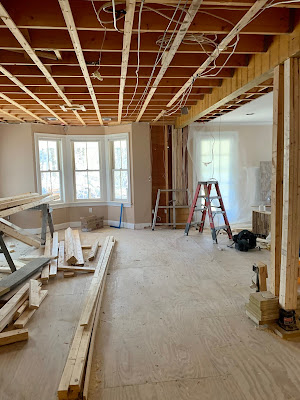 Beam two goes in and will be connected with a U shaped metal piece to connect one beam to the other and they are supported on both ends. 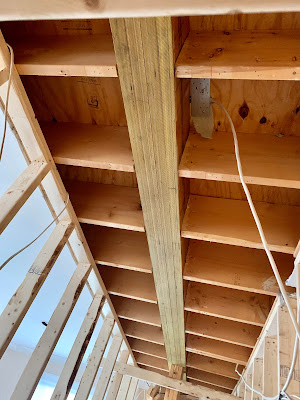 During the week I went with the designer to pick our soap stone.  We are securing 4 pieces of stone, but probably only need three.  We chose soapstone for a number of reasons: It is evironmentally friendly, it is locally mined, it can take a lot of abuse, and nothing stains it.  Plus - I really didn't want granite.  I wanted something different.  It is more us.  It is gray when it comes out of the earth and you can either leave it gray, or oil it to turn it black.  Our plan at this point is to oil it.  But look at it - isn't it gorgeous?  We needed a huge piece for our island, and were very excited to find they had enough to do one solid slab for that. 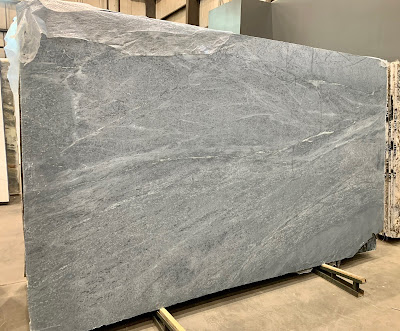 The stoneyard put a little oil on it to show us what it would look like black. 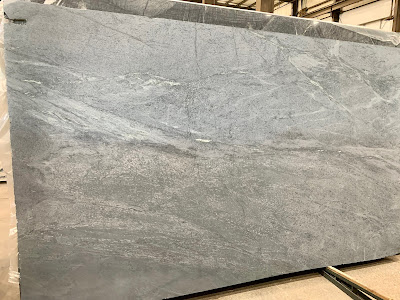 On Friday the last of the support walls came down and we have a complete open concept in our living room.  I wanted the pantry and Mat wanted this.  It is not easy to describe or photograph the difference from what we had 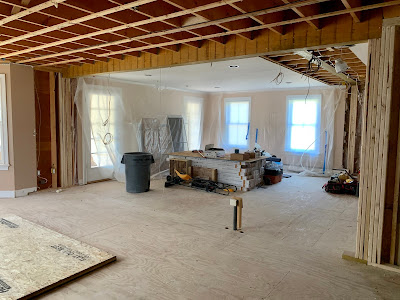 This is how the two beams were secured. 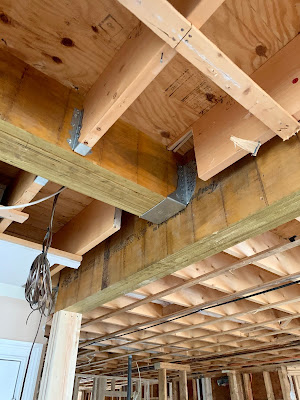 The look from the living room into the kitchen area.  That central vac piece there on the floor to the left will be gone - they just haven't moved it yet. 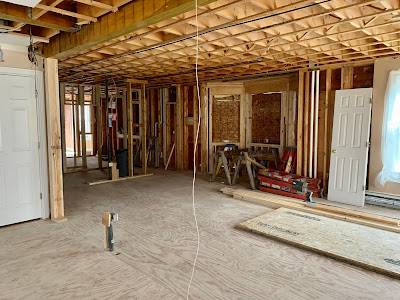 What I will see from my sink area 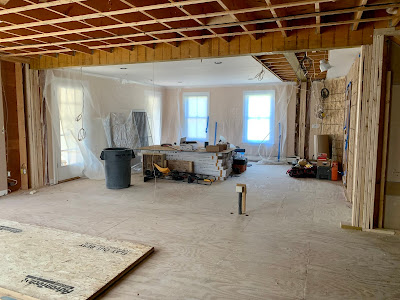