This past weekend, we had a bit of a scare with Arlington.  Last Saturday, while we were babysitting a dog for a friend, that dog bit her.  It was an accident, but unfortunately it lead to a hospital stay.

Arlington was talking to the dog, leaning in close to his face.  When she went to take him off the couch, he got upset and bit her.  Somehow, he bit her INSIDE her mouth as well as outside - got the corner of her mouth, gums and cheek.  It startled Arlington and she took a big gasp of air and started to cry.  Because I am sure it hurt like nothing else.

We cleaned the cuts on her cheek with soap and water, and then had her do a salt/warm water swish with her mouth once the bleeding stopped.  The cut inside her mouth was bad, but it stopped bleeding in about 10 minutes.  We gave her some ice and decided to wait and see how it went.  It seemed very minor.  I did a little research, thinking the cut in her mouth would probably need stitches because it seemed deep, but that isn't something that is often done.  So we waited.

About one hour passed and Arlington came out of her room to announce that her face felt very swollen.  In that short amount of time, she went from having three small cuts to her cheek being 3 times its normal size.  Not the reaction we were expecting, we decided it was time for a trip to the emergency room at the Children's Hospital

It is now 8pm on Saturday night.  This is not my first (or second) trip to the emergency room here so I felt pretty good about how it was going to go.  The Pediatric ER here in Basel runs like a well oiled machine.  We have never had to wait more than about 15 minutes.  By then her eyes were also swollen, so it was no doubt that we would be seeing a doctor.

The doctors came into the room and they were very curious about why the swelling appeared so fast.  They had some theories, but the timeline didn't fit.  They thought it was some kind of subcutaneous emphysema, but they said it doesn't usually appear that quickly after a bite (or puncture wound).  It usually takes a few days.  Her vitals were good.  The doctors thought they might just monitor her awhile and then possibly do some antibiotics and ice in the ER and see how it went.


This is Arlington sitting in triage one hour after the bite 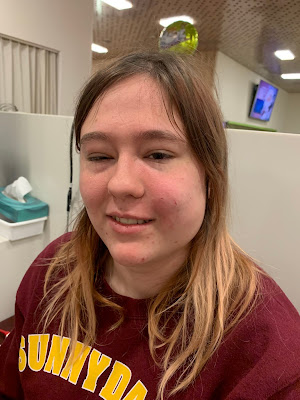 Another hour passes and her eye swells all the way closed and the skin gets very tight.  The weird part was that it was the eye OPPOSITE where she got the bite.  This got the doctors very concerned.  They drew blood, and started to do a physical manipulation of her skin to check the swelling and found that it was making a crackling sound when they pushed on it.  Her face had filled with air, and that meant she was getting admitted. 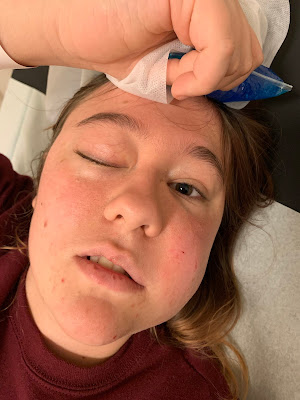 We were told that they thought it was a bad bacterial infection mixed with subcutaneous emphysema.  A dangerous air bacteria that was in her face that they needed to get under control.  They started her on two heavy duty IV antibiotics and got her settled into her room at 11pm.  The nurses encouraged me to go home and sleep - she was old enough to stay on her own - and come back in the morning. (this is very Swiss) So I did as they said.

I was back by 7am so I wouldn't miss the doctors.  The swelling did not improve overnight, but it didn't get worse.  She had been getting antibiotics through her IV every few hours overnight plus pain medication.  Her whole face hurt.  In the morning we saw the doctors and the infection disease doctors, and they were just baffled on why it spread so fast.  By now her neck and chest were also hurting and the doctors could feel the air under her skin.

Infectious disease came back.  They told us that a dog's mouth has a list of bacteria a mile long and he was sure they would never pinpoint the exact one.  So she was on very potent broad spectrum antibiotcs that he was confident would do the job.  He said at the time, the antibiotics were keeping pace with the infection.  However, his job was to get in front of it.  That is what they were struggling with.  She wasn't getting worse, but she wasn't getting better.  And now it was starting to effect her breathing.

She got moved to the ICU because she just had so much pressure in her neck and chest.  She had x-rays and a CT scan - all still confirming the air was in the skin, but still spreading.  So the doctors hooked her up to monitors, and she had a 1:1 nurse, and they called infectious disease.  Infectious disease added a 3rd antibiotic, and gave her stronger pain medication.

FINALLY - Monday morning, she turned a corner.  By that morning, her eye had slightly opened and her cheek looked a little less swollen.  She felt a little better.  The triple antibiotics were the ticket.  By lunch time Monday, the doctors felt she could come out of the ICU and back to her regular room.  We were told she had a massive air pocket in her cheek.  They were worried it was getting into her sinuses.  They still couldn't explain why the opposite eye was swollen.  She remained a mystery. 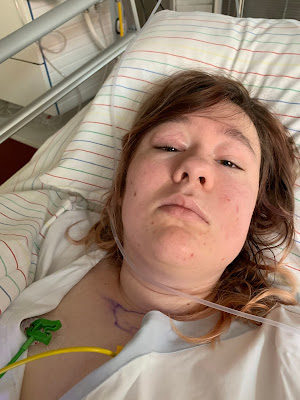 We saw infectiou disease again on Monday afternoon.  They felt confident that they were on the right track.  Blood work looked better.  Arlington felt better.  Now it was just a matter of being patient to see if she continued to improve.  Infectious disease thought we were looking at staying until Friday if the pace of recovery didn't pick up.

By Tuesday morning, she was looking even better.  All the doctors agreed it was time to switch her to the three antibiotics orally to see if she could go home and continue to improve.  If she continued to get better being off the IV antibiotics, we could leave on Wednesday.  By Tuesday evening, her eye was half way open, her chest pain had disappeared, and her face swelling had gone down more. 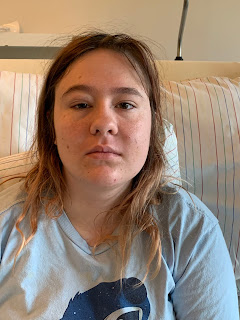 This morning, (Wednesday - day 5) she looked great.  The cheek is almost down to regular size.  She has just a small amount of air in the cheek and neck, and a small amount in the eye.  Pain is much less.  She is only dealing with nausea because that is a side effect of the potent antibiotics.  The doctors felt that she could go home.  She cannot go to school for the rest of the week.  She is on the antibiotics another 7 days.  She sees the pediatrician next Tuesday to see if the air is gone and make sure she doesn't need antibiotics longer than the 7 days. 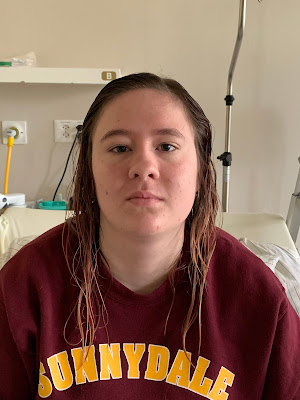 The last thing will be a check back in with infectious disease in three weeks and another scan to make sure she is in the clear.  Then, and only then, can we put all of this behind us. 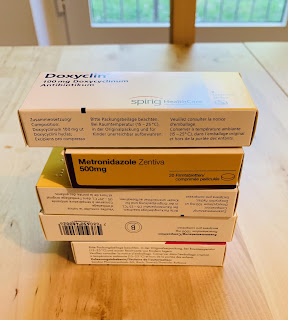 The doctor told us this morning that Arlington was very lucky.  He said if we would have waited 24 hours to bring her in, she could have died.  He said often people die from this infection because it is so aggressive and gets out of control quickly.  We made the right decision to not "wait and see".  It saved her life.

Again - this was an accident.  A bunch of things went wrong all at once, and it was just pure bad luck.  We are grateful for the Swiss doctors who tend to see a zebra when other doctors are looking for a horse.  Never in a million years would we have expected a dog bite to do this to a person.

The most important thing is that she is going to be fine.  I would say by the weekend her face will be back to its normal size and she will be feeling almost 100%.  And if she can come off the antibiotics next week as planned, the nausea will go away and this will all be over.

**Update (June 4, 2019) - Arlington finished her course of antibiotics and the pediatrician said she looked good.  Then she developed a fungal infection from being on so many antibiotics, so yesterday we were back at the doctor's office for some more medication.  It is mild, so it should clear up in less than a week