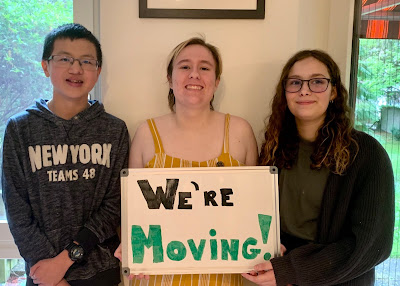 Well - it is official.  The Pletcher's time in Europe has come to an end. This summer we will be moving back to the United states - and back to our house in Littleton, Massachusetts.  We all have mixed feelings about our move back to the United States.  We have been in Switzerland for 3 years and it has just flown by.  We are still trying to wrap our head around everything and know that these next few months are going to be tough in a lot of ways.

Some of you may be wondering why we decided it was time to move.  Probably not.  But it is your lucky day and I am going to tell you anyway.  Mat has decided it was time for a job change.  His job at Roche has been a great one, and he has really loved the experience of being Head of Rare Disease.  But the job is changing and the organization was going in a direction he really wasn't interested in, so when a few jobs started to hunt him, he decided to take the calls.  He wasn't activly searching, but decided to take a look at what was out there.  He was approached by a few companies, and he decided to take the interviews.  We started to entertain the thought of leaving.  We have struggled with that thought for months.  We have had a lot of sleepless nights trying to figure out what was best for our family and for him.

What started to send us over the tipping point of moving was Arlington's decision to go to college this year back in the United States.  I have been fretting about that for a few months as well - trying to figure out how we were going to get her the support she needed while we were living in Switzerland.  Arlington is 17 so I worried about her having a legal guardian close by in case of emergencies.  (Plus about a million other things).  So when Mat started to think about taking a new job back in the United States - I didn't fight it.  I thought it would make things a lot easier to be near her - at least in the same country - when it came to the little things.  Things parents worry about.

Mat entertained several positions and finally settled on the one he felt was the best fit.  He is going to be the Senior Vice President and Head of Research (a Chief Science Officer role) for Audentes Therapeutics.  Luckily that offer is taking us back to Boston to live.  Back to the house we still own, in the town we still love.  It will make things so much easier to leave the life we have built here in Basel, moving back to the familiar.  Not just for me, but for the kids as well.  Moving Finley is always a challenge, so being able to put her back into a familiar environment with familiar supports feels like winning the lottery.

But what about our life here?   We have a wonderful life here.  The kids have made some great friends.  I have made some life long friends.  We have had countless amazing experiences.  We gave the kids a taste of the big world and what it is like outside of their comfort bubble.  Finley has become extremely independent - which was one of the reasons we moved here in the first place.  We have seen more countries and beautiful places in the last 3 years than I have in my entire lifetime.  We made the most of our experience in a 1000 different ways, and I am going to mourn the loss of what we had here.  We don't feel finished with living in Europe.  The end has come at a time it needed to for a few reasons, but it doesn't mean we felt done.   But that is a blog post for another day.

We are going to be moving back to Boston over the summer.  The transition will be slow.  We have to put all of our belongings on a boat that will take about 2-3 months to get back to the United States.  We are going to be car shopping (we have not owned a car in 3 years!), and getting the kids registered for school and Arlington settled into the Univeristy of Massachusetts.  Mat is going to be getting settled into his new job.

In all of this we ask for patience with us.  We are going to be unsettled and sad for awhile.  But we are going to be excited too.  A lot of feelings to deal with over the coming months.  We aren't the same people who left in 2017.  We will need time to adjust.  We are going to mourn the loss of our lives and our friends in Basel for awhile.  Mixed emotions always come with every move we make.  This is the first time we are moving back to somewhere we have been before.  It is a weird, yet comforting, feeling.

Thank you for following our European journey these last few years.  We now have the travel bug, and we know how much there is to see.  We will not stop just becuase we no longer live here.  There are so many places to explore.  We hope we have inspired you to see more of this big blue ball.
at May 05, 2020