Our poor dog Scooby has had a rough couple of months.  Back in February, before we left for Japan, he started limping.  We took him to our regular vet, but the vet could not find anything wrong.  Thought it might be his back, or that he twisted himself funny when chasing a cat.  (which he often does - our neighbors have several).  He gave him some medication and sent us on our way.

A few days later, he stopped walking on the leg all together, and we panicked.  So we took him to a 24 hour vet service (of course it happened on a weekend) and the felt it was the same - him just babying an injury.  But they wanted to do x-rays, so the next morning we took him in and left him for the day.  The x-rays were negative, so no broken bones.  The orthopedic doctor saw him there, and they did some massage on his back to see if it made any difference.

And it did for awhile.  They sent him home on 3 different pain medications, and an antiinflammatory.  He started walking on the leg again.  He would still limp, but as he started to move, he would walk normally.  He just seemed to be stiffed.  We resumed his walk schedule.  We left for Japan and the dog sitter said he was fine.

The pain medication ran out and he started to limp a little more frequently.  And then he started to lick himself - developed a few hot spots on his body.  Seemed to be very aggitated.  So we called our regular vet back and he put him on a different pain medication.  It didn't work at all.  He sent us to an orthopedic specialist.  That speicalist felt Scooby was in very bad shape.  He had lost a lot of muscle mass from the leg limping.  He did a lot of tests and x-rays and drew a ton of blood.  They were still thinking it was his back.

Then about 2 weeks ago Scooby was outside using the bathroom and he started to yelp.  And then he refused to put the leg down at all.  He could barely move.  He was in a cone full time because he would like any part of his body he could reach.  His hair started to fall out.

The MRI revealed no tumors, no back issues, no nerve issues.  While asleep the doctor manipulated the leg and found that it seemed to be a torn ligament.  He said it is common in dogs, and given the fact that he yelped and stopped walking on the leg, he was 99% sure that was what this was.  He called the orthopedic vet and relayed this to him.  All blood work came back negative, so the ortho vet sent us to a surgeon.

Finally this past Thursday Scooby had surgery to repair the ligament.  after over 2 months of trying to figure out what was wrong, he got what he needed.  He now has pins and a metal plate in the leg.  He has to take it easy for about 8 weeks and hopefully this will make him all better.

Poor dog.  This was a very expensive adventure, but we are glad we finally have an answer and a fix. 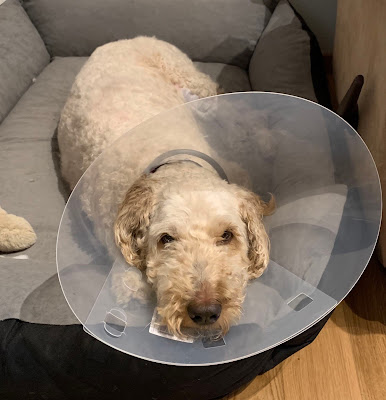