As you know, Finley is in a Bilingual school.  It was a tough transition for her last year, and we had a lot of tears the first few months of school.  She spends half of her week with classes in English and half the week in German.

Little kids have such pliable brains, and she has picked up the language quickly.  We saw a big change in her abilities with German this fall - something has definitely clicked.  She will easedrop on conversations on the tram and understand what they are saying and no even realize that she is doing it.  I have seen her speak to youngest kids at the tram stops in German and understand what they say in response.  We are proud of her progress.

She brough home a story she wrote for school and wanted me to see it.  When she handed it to me - it was all in German.  She had to translate it for me, but this was our proudest moment because she wrote this without any assistance.

I hope, even after leave Switzerland, that she keeps the language.  That we can find a way for her to continue to learn German when we return to the states because what a gift - to know a second language so well. 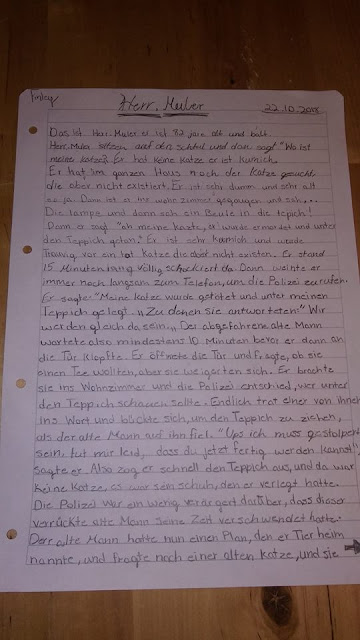