Today was busy and I accomplished a lot of things on my list.  First I saw 3 more apartments.  None that really said "we are the one!" (I still have a favorite), but they were nice.  Our Swiss guide then took me to the public library so I could have help signing up for a public library card.  Public Library cards are not free here in Basel.  It was 50 Francs for a year access pass to use the library.  Considering that is a lot less than what I would spend buying books, it was a fine price to pay.  Believe it or not, the public libraries here in Basel have large English sections.  So that was exciting news.  At least it gives me another option for reading. 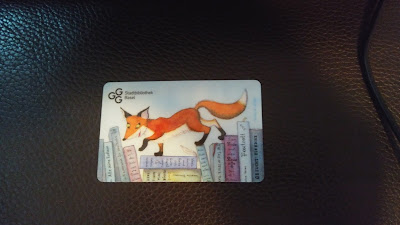 The Library that has the English section is called GGG.  There are several throughout the city, but the two biggest ones have the most English books (obviously).  Beautiful public libraries.  I enjoyed roaming around a bit today and look forward to going back and using my card. 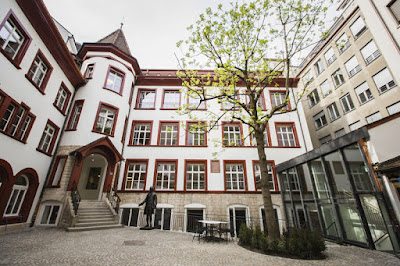 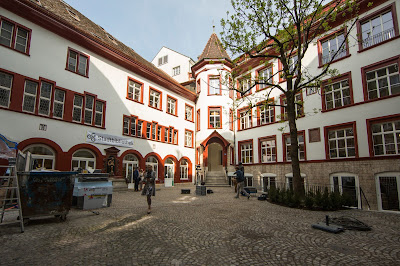 After I got the library card, we went into Germany so I could pick up an Amazon package.  You might remember that we opened a PO Box (Which was free) in Germany to ship packages to right from Amazon because it is cheap.  Really cheap.  Mat needed two small things, so he ordered them so we could try it out.  Since I had not gone before, it was nice to have our Swiss guide with us so that she could translate and help me get my card.  Now that I have my actual card to get packages, it will be easy to do it on my own the next time.  The people in the PO Box store were very kind, and told me that they will use me to practice their English.

We then returned to the apartment so I could pick up our dog, Scooby.  We got the last of the paperwork we needed to get him his Swiss passport.   We went to the vet and got him registered and got his passport.  In the mail he will get a medallion that he will wear around his neck that means he is now a Swiss dog and allowed to be in the country.  The passport will mostly be used for when we go to the vet.  We can put his picture in it, so that should be fun. 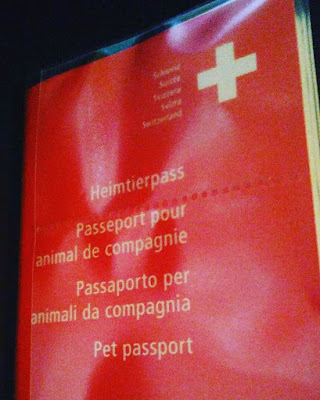 This afternoon I met up with the woman I met earlier this week and we went Rhine Schwimmin.  It was a blast.  I was worried for nothing.  The river doesn't move that fast, and I had my Fisch.  It was REALLY cold at first, but it was such a hot day after a few minutes we got used to it and it felt good to float along.  Being with someone who has done it tons of times was a great way to experience it for the first time.  She showed me the best place to get into the water, and all kinds of landmarks along the way.  She talked to me about avoiding the boats and the buoys, and all about the naked old men that sunbathe along the river (we saw 5....it wasn't pretty).  It wasn't really complicated to get out, but I could see the kids having a bit of a hard time if we don't get started over to the side fast enough.  Mat and I will be doing it a few times together before we take the kids along to make sure we are comfortable getting them to the side.

We got out and sunbathed and chatted and watched the Rhine River Cruises.  It was surreal to sit there and just enjoy a beautiful day.  I can't wait to go again.  We had time to walk back to where we started, and walking along the Rhine is really pretty (and shaded), so it was a nice way to end the afternoon.  I will miss her (she goes home to the US tomorrow).  I am going to have to look for a buddy to swim with during the day.

When I picked Finley up from school, she and I went into Germany so she could cross the bridge from Germany into France.  She wanted to be the first one to do that.  IT was cool to cross from one country to another over a pedestrian bridge and stand between two countries in the middle of the river.


Bridge from Germany into France 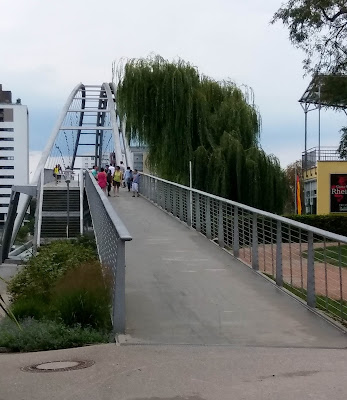 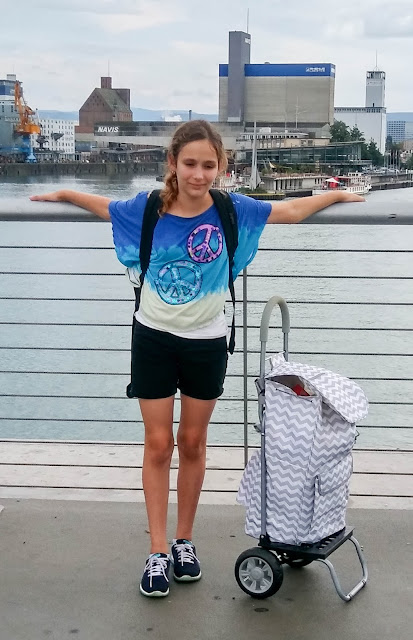 Switzerland from the bridge

German mountains from the bridge

Another great day.  Here is an extra picture from today.