I am counting the 7th of August as our first official day in Switzerland.  We have not been here for 24 hours, and today we accomplished many things that we needed to do to settle in.

This morning, Mat went to work for about 1 hour and got his ID badge.  He met a few people (they put a nice plant on his desk) and was told to go home and be ready for a fresh start tomorrow.  He only has a 3 block walk to Roche from our corporate apartment, so he is in Heaven right now.  Shortest commute he has ever had with any of his jobs.  I am going to have a hard time convincing him to move in a few months.

This morning while we were waiting for our Swiss guide to pick us up, I sat on our balcony and drank some (American) coffee.  The weather this morning was around 70 degrees and breezy, so it was lovely outside.  The back of our apartment faces out on the green space of our apartment building, so it isn't a terrible view.  We opened all the windows last night (recommended since there isn't any air conditioning in the apartments here in Switzerland - they are very energy conscious).  So this morning, the apartment was very cool.  By 10am, though, the sun started shining, so the windows get closed and the very heavy metal shades get drawn to keep the apartment cool.  It is going to take some getting used to. 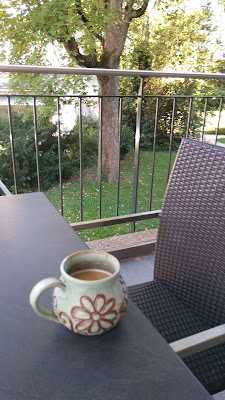 I then took a walk.  There is a small walking path near the apartment and it lead to a street that had a few shops and a small grocery store.  (Called Migro - pronounced Me Grow).  I am glad to have a small grocery stop so close to the house for "emergency" runs....but due to the expensive prices, it will be used mainly for that.  A made a circle around the block and back to the apartment and was pretty proud that I went out on my own.  I know that sounds ridiculous, but not speaking the language - even a little bit - is daunting.  I am still not sure culture wise what to do when I pass someone.  Do I say hello (Hallo in German)?  Do I nod and smile?  Do I just walk by?  Each book I read says something different.  Thankfully Roche is giving us 3 months of "culture lessons" on top of our German lessons, so that will help.

After lunch our Swiss guide came and picked us up and we went to register with the Canton.  We are in the Canton of Basel Stadt.  It was set up like the DMV - you take a number, bring every important document you own (marriage certificate, birth certificates, passports, job descriptions, apartment lease, etc) and they look them over.  Once they determined we had everything we needed, we had our pictures taken, our fingerprints done, and signed the permit.  We were issued a temporary permit (That would get us what we needed) and our permanent residency permit will come in two weeks.  (it is a card that looks like a drivers license).  This we will carry with us when we travel around.

After that, it was time for the bank.  This was a 1 1/2 hour long appointment, so our Swiss guide took the kids shopping (Which they loved).  We opened a Swiss bank account.  The first thing we were told - Hollywood does not portray Swiss bank accounts accurately.  At least not any more.  Since the bank problems in the US, Swiss has really tightened their security and the way they do banking. 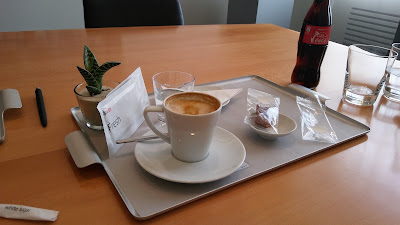 We were able to set up our account, and our credit cards all at once spot.  It was really easy.  They even brought us treats (with a real succulent plant in the corner) while we talked.

After the bank, we went to a local bookstore that sold passes to the SBB.  This is the train/tram/boat system here in Switzerland.  The kids and I needed annual passes because we will be riding the tram daily.  (the kids to school and me taking Finley to school and running errands).  Because Finley will only be riding with me for the time being, her pass was REALLY cheap.  (15 Francs for the whole year).  As long as a kid rides with a paying parent - and they are under 16 - they can get a junior pass.  This pass is good all over Switzerland (not just locally) and for all forms of transport.  We got one for Cainan and Arlington as well (on top of their "ride alone" passes).  It is a great deal because the A-Ubo pass that we could get only works in the Basel cantons and a few surrounding.  So if we want to go to Zurich, Bern, etc....we have to pay another fee.  The kids don't.  Win.

After the SBB, we had a snack at a local bakery so the kids wouldn't melt, and then went into Germany to open a PO Box.  Our Swiss guide told us this is the cheapest way to get packages from Amazon without paying ridiculous delivery prices, so off we went.  Germany, remember, for us, is less than 10 minutes away.  So this works - much to Mat's chagrin.  Amazon lives on!

At this time, it is 6:30pm, so we returned home.  We had dinner and now we are getting ready for bed.  We are still pretty jet lagged, so we are off to sleep early again today.